Why and how to study in France? 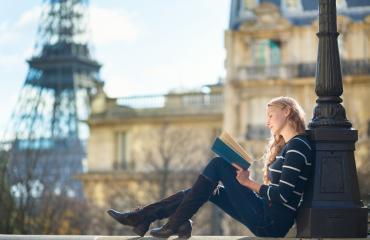 Are you seduced by the idea of doing part of your studies in France? You're not the only one! France ranks 4th among the countries welcoming international students, after the United States, England and Australia. Above all, it is the first non-English-speaking host country! Nearly 324,000 young people from all over the world came to study in France for the year 2018-2019. And France has great ambitions in this area, because the Ministry of Higher Education has expressed the wish to welcome 500,000 by 2027.

Are you still hesitating to take the plunge? Let us convince you to study in France for a semester or more!

Why study in France?

There are no less than 3,500 French higher education institutions, public or private (universities, business schools, etc...). The choice is vast and the quality is there: France is recognised for the excellence of its programmes, in all levels and disciplines: political science, human sciences, management, international relations, etc…

In view of the number of courses offered, it is easy to create a personalised course, by opting for a general training or an apprenticeship, a specialisation, a short or long course...

In France, studies are organised according to the "LMD" system, i.e. Licence, Master and Doctorate, in order to match the European countries other higher education systems. Thus, by spending a semester in France, a foreign student can acquire credits (ECTS), common to other countries and therefore easily transferable to his country of origin. This system therefore allows European students to obtain a diploma recognised throughout Europe. In order to integrate more international mobility into study projects, the European Union has created Erasmus+, a programme that sends thousands of young people every year to study in a country other than their own.

Thanks to agreements with European Union countries, it is possible to get a diploma issued by a French educational institution recognised in order to work or continue studying abroad. In other countries, recognition is on a case-by-case basis. But some diplomas awarded in France are world-renowned, as are some leading French business schools.

French higher education has been able to respond to world changes by focusing on an opening towards business, international and research. It should be noted, with regard to research, that France is home to 3 of the world's largest research organisations, such as the CNRS or the CEA, and there are no fewer than 13 French Fields medallists. If you want to continue your secondary studies with a doctorate, you have come to the right place!

It is important to note that in France, no distinction is made between French and international students, who are very generally subject to the same admission processes and who ultimately obtain the same diplomas.

Coming to study in France for its quality of life

The living environment for a foreign student in France is very attractive: as the number one tourist destination, France is at the heart of Europe and boasts a very wide variety of landscapes. In other words, there are things to see and do for an international student when he sets foot in France! To take advantage of this geographical richness, there are many transport solutions, with national or international airports, high-speed trains, a dense motorway network, cycle paths....

Working conditions are also attractive, with a legal working week of 35 hours, paid holidays and a minimum wage, among the highest in the world.

By coming to France for higher education, you will be able to improve your level of French, a language that is important because there are more than 180 million french-speaking people around the world. It is also a language used in major international institutions. It is possible to learn once in France through a Foreign Language (FLE) programmes.

Obviously, history and architecture have a significant place in the French landscape: with all the monuments, museums, festivals, you will never be short of ideas on how to occupy your student life!

Artistic creation has also an international influence whether it is literature, music, cinema... And of course, if you are a foodie, then France will be the ideal country to go to for the duration of a year of study, placed under the sign of gastronomic discovery!

What is the procedure to come and study in France?

The procedures to come and study in France differ according to your level of study and especially your country of residence.

If a student comes from a European Union country or from the European Economic Area and wishes to study in France as soon as he obtains his high school diploma, the same procedure as French high school students must be followed, i. e. pre-register for the first year of higher education on the Parcoursup platform. Parcoursup is a website that brings together all (or almost all) higher education courses, and where future European students can register their wishes and complete their application forms.

If you are not a national member of an European Union country or from the European Economic Area, the procedure will depend on your country of residence, your degree obtained and the studies you want to enrol into in France. In some cases, you will have to go through Parcoursup: this is the case if you are a holder or if you are preparing a high school diploma (French or European) and you want to come and study in a

University. If you wish to follow a selective non-university course (such as a BTS), you must also apply on Parcoursup.

Finally, if you are looking for a selective university education, such as a DUT, and you live in a country with a Campus France space, you can apply on your country's Campus France website.

If you want to continue your studies in France

If you have already completed undergraduate studies outside France and wish to study in France, you must already find out about the recognition of your foreign diploma.

If your country has a French Campus space with a "Studies in France" (CEF) procedure, you can read about the procedures by visiting their website. Otherwise, you will need to contact directly the institution where you wish to pursue your higher education.

In addition to administrative registration at the institution in question, a French test such as the CIEP or TCF DAP may be required.

If the student isn’t a citizen of the European Union, he must obtain a student visa. You can apply for a visa at the French embassy or consulate in your country of origin. Two visas are possible: the short stay visa for students who only go to France to take an entrance exam, and the long stay visa, if the student that will study for more than three months. To obtain this residence permit, the student must provide supporting documents: a certificate from the university and proof that he will be able to finance his life and studies in France.

Finally, as an international student, you can benefit from aid to finance your studies. Indeed, embassies can award scholarships or internships and tuition fee exemptions. The latter are primarily allocated to African students.

French institutions themselves may grant exemptions or reduced registration fees based on bilateral agreements with foreign institutions. How to finance your studies?

Tuition, rent, deposit... you start your higher education studies and all these fees are new to you? Are you looking for solutions (loan, scholarship, financial help...) to finance your studies? Here you will find various ways that will help you with your finance throughout your schooling. After the bachelor: what studies? What opportunities?

With an excellent employment rate and its multiple possibilities of specialisation in business management, the bachelor degree is a popular diploma for students as it is appreciated by recruiters. For those wanting to delay their entry onto the job market and continue with their studies, this diploma offers the possibility to enter a master's degree within a business school or to join a university course. So, what to do after a bachelor? Choose a professional life? Continue with your studies? We will explain all of the possibilities available to you after obtaining your bachelor's degree. Why getting a MBA?

The Master of Business Administration (MBA), a diploma recognised for its international dimension, can also be intended for students holding a 3-year university degree and executives who want to boost their professional career or start a career change. If you are interested in this type of programme offered by leading business schools, here is an overview of its main advantages.