IPAG acquires a coat of arms

As part of the general culture courses given at the IPAG, 2nd year students were able to follow the visual creation and heraldry courses given by Professor Marc Mosnier, illustrator and specialist in the study of coats of arms and coats of arms.

After learning the main principles of heraldry and symbolism, our students were able to reflect on how the IPAG coat of arms could be composed before proposing an artistic expression.

Here are the results of their work: bees, symbols of cohesion and work, frame the key to the opening of knowledge and the pen of knowledge. The shield is supported by the laurels of success and by the official motto of the school "Going beyond together" translated into Latin for the occasion: "Simul ultra ire". A mortar of a graduate student, symbol of studies, crowns it.

"Gules a key Or and a feather Argent in saltire between four bees Or". 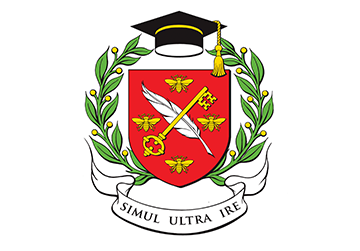 Congratulations to all the students who took part in this project, especially Perrine Salette and Carmen Cuevas, whose visual creations now form the official IPAG coat of arms.

Just like the European Business Schools and Universities, the IPAG now has its coat of arms!

2019 Welcome Weekend: back to the student event of the year in video

IPAG has just been awarded the "Welcome to France" label for the next 4 years.