The advantages of apprenticeship for companies in France 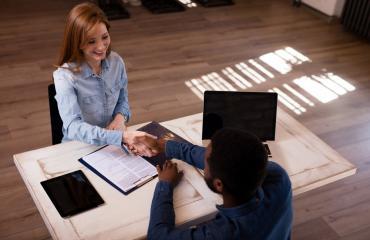 More and more programmes require apprenticeship, a system that has many advantages. For the apprentice student, it is obviously an opportunity to prepare for entering the working life while carrying out a complete professional project by alternating days or weeks in a company with periods at school.

But this type of contract has many advantages for the company as well!

Simplified administrative procedures for the recruitment of an apprentice student

The apprentices contract is open to young people aged 16 to 29. Previously, the age limit was set at 26 years old, but the government, in order to facilitate the employment  of young people, raised this limit to 29 years old, due to the law "freedom to choose one's professional future".

There are certain exceptions: for example, disabled workers or people wishing to create a company or taking over a company can benefit from an apprenticeship contract after 30 years old, without any age limit.

The professionalisation contract is open to young people aged 16 to 25 and to all jobseekers aged 26 and over. Other categories of people can benefit from it, such as beneficiaries of the RSA or the allowance for disabled adults.

The duration of the apprenticeship varies between one and three years: most of the time they are therefore fixed-term contracts, but there are exceptions.

Whatever the type of contract chosen, the principle remains the same: the employee or apprentice follows theoretical courses and practical training within his host company, in order to prepare a state diploma (CAP, BTS, Licence, Master, etc...) or a professional title registered in the RNCP (Répertoire national des certifications professionnelles).

In order to encourage the use of this type of contract, the Ministry of Labour has considerably facilitated the administrative procedures for registration. A government website has been set up, where employers can quickly download the documents needed for recruitment and register contract declaration forms.

From 1 January 2020, companies will have to submit the professionalisation contract but also the apprentice  contract to their skills operator (OPCO).

The advantageous wage cost of the apprenticeship for the company

The first advantage of these employment contracts, is obviously the wage cost. Indeed, using an apprenticeship allows substantial savings!

Note that 26-year-old apprentices must be paid the minimum wage or the conventional minimum wage for the job they are in.

Of course, conventional or contractual agreement may set a higher remuneration for the apprenticeship.

The financial advantages of the apprenticeship for the company

Other measures have been put in place to encourage companies to welcome an apprentice into their workforce.

Many financial aids were granted to companies hosting an apprentice, such as the apprenticeship bonus, the VSE for young apprentices, the tax credit. From now on, for contracts concluded from 1 January 2019 onwards, these arrangements will be replaced by the single apprentice aid.

It is reserved for SMEs, i.e. companies with fewer than 250 employees, who recruit an apprentice preparing a diploma whose level is at most equivalent to the Bac level. The aid amounts to €4,125 for the first year, €2,000 and then €1,200 for the second and third years. It is paid monthly, as soon as the apprenticeship contract begins.

In addition, the employer may benefit from a total or partial exemption from social contributions related to the apprentice.

There is more support for the professionalisation contract. These include, among others, the AGEFIPH's aid for the hiring of a disabled person, the Pôle emploi's flat-rate aid (maximum €2,000) or the state assistance for the hiring of a job seeker over 45 years of age on a fixed-term or permanent contract (also €2,000).

Each company is required to contribute to the financing of professional training and apprenticeship. Until recently, OPCAs (Organismes Paritaires Collecteurs Agréés) collected these contributions. It is now the OPCOs, and later, the URSSAF, who will take care of it. In some cases, the employer may ask OPCO to cover all or part of the apprentice student's tuition fees.

Although they are considered as employees in their own right, the apprentice isn’t counted in the company's workforce, which can avoid certain obligations imposed on the employer depending on the number of employees.

Recruiting an apprentice for a future job opening

Recruiting an apprentice may be a very good response to a vacancy in the company, and this at a lower cost, especially in sectors that have difficulty recruiting qualified employees. The apprenticeship allows the employer to train the apprentice at his work methods and to support him along the way, so that he can eventually be hired full-time at the end of the training!

The apprenticeship is therefore an excellent way to recruit with confidence a new employee with valuable professional skills that the company has had the opportunity to evaluate for months or even years.

Giving a fresh perspective on the company

Finally, recruiting an apprentice means taking a fresh look at your company! Indeed, the apprentice is generally a young person who discovers the world of work and who will be able to discuss the functioning of the company and bring new ideas. Especially since the very fresh knowledge acquired during his training, it can prove very useful in the context of your activity (new technologies, new tools, new working methods...).

Your apprentice will gradually become operational and can be a vector of innovation, especially if the core target of your activity is the youth.

The apprentice student must also benefit from a referent tutor or apprentice mentor within his host company, responsible for his follow-up, integration and evaluation. This is an opportunity to give new responsibilities to an employee, who can benefit from training. As future high-school graduates get ready to state their wishes and their choice of orientation, you may be among those who do not yet have a clear idea of their career plans. From business schools and preparatory classes to engineering schools, there is a wide range of post-baccalaureate programmes available in higher education, and you are still looking for a career path? Here is our orientation guide to help you choose your future degree programme! How to successfully find a job?

Shaping one's career and professional project is a mission in which all students in post-graduate studies are involved. When they choose their training, their professional experiences, their business schools, they have only one objective in the end: to make a place for themselves on the job market. Competitive or non-competitive sectors of activity, here are a few keys to successful professional insertion! Finding an internship abroad: why? Where? How?

For business school students, completing an internship of several months abroad is a real asset when looking for a job, and even an essential step for young graduates whose professional ambition is to work abroad. Despite the health crisis and waiting for the Ministry of Foreign Affairs to give the green light for expatriation, you can already prepare your project. Here are a few tips before you start looking for an internship...